Some time ago, I read James Gleick’s book The Information: a History, a Theory, a Flood. In the first chapter, he recounts the remarkable discovery of John F. Carrington, an English missionary, who took up residence in the Congo in 1938, working for the Baptist Missionary Society. On a trip from the Society’s Yakutsu station on the Upper Congo River through the Bambole Forest, he realized that the local people were able to use drums to send detailed messages over long distances. Here is an example, a funeral announcement:

It took Carrington some time to decipher the secret of the drums. The key fact was that the local language was a tonal one, with two tones, high and low. The drummers, using slit drums, would sound the tones of the words to be sent. Thus alambaka boili, meaning “he watched the riverbank,” was rendered as H L H H L L L, where H is a high-pitched sound and L is low-pitched. While much information is lost in this pitch encoding, that which remains, plus the context, plus the use of many conventional formulae, gives the listener enough information to reconstruct the original sentence.

As a completely useless but fun exercise, I decided to make a little app that will turn text into (a fake) drum language. My approach was to map each letter a–z to a phonetic class, then map phonetic classes to musical pitches. The phonetic class of a, e, i, o, u is VOWEL. Consonants are divided into various classes, e.g., m, n of type NASAL. Each class is assigned a pitch, and so any string of characters is mapped to a sequence of pitch names. For example, Hello is assigned the sequence G3 G2 C3 C3 G2. Here the numerical part of a pitch name refers to its octave. Thus G3 is one octave higher than G2. The pitches used to represent the pitch classes are G2 C3, E3, F3, G3, Bb3, D — a dominant ninth chord. This choice of mapping makes the drumming sound relatively harmonius.

The string “G3 G2 C3 C3 G2” in the example just given is sent to the computer’s audio processor to be rendered for the user’s listening enjoyment. The app, which you may try out (HERE), looks like this: 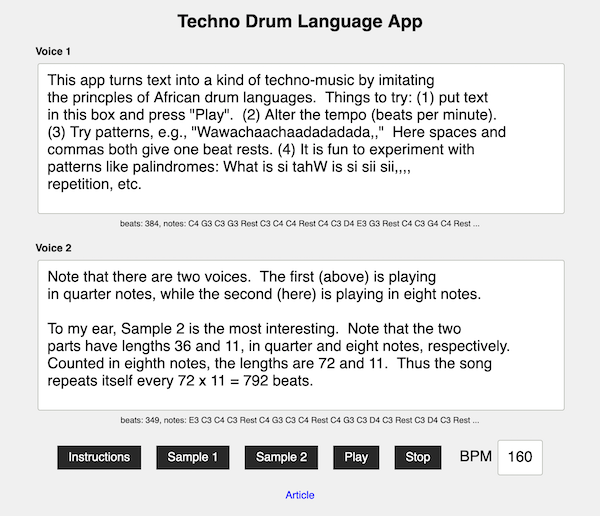 The code is available on GitHub. The app is written in Elm and renders audio by sending a string of note values to Tone.js using ports.

NOTE: The mapping of letters to phonetic classes is crude, since English spelling is far from phonetic. A better implmenetation would employ a more faithful mapping.

Gleick writes that Carrington eventually learned to drum, mainly in Kele, a Bantu language in what is now Eastern Zaire. He recounts this story:

A Lokele villager said of Carrington “He is not really European, despite the color of his skin. He used to be from our village, one of us. After he died, the spirits made a mistake and sent him off far away to a village of whites to enter the body of a little baby who was born of a white woman instead of one of ours. But he belongs to us, he could not forget where he came from, and so he came back. If he is a bit awkward on the drums, this is because of the poor education that the whites gave him.”

There is much more in Gleick’s book. It is really good read.